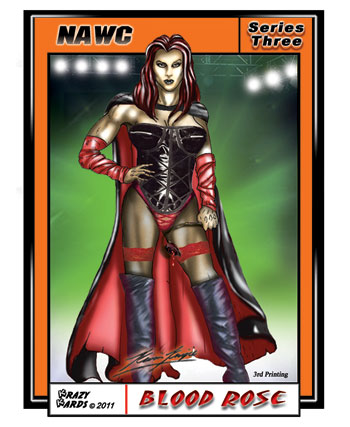 Blood Rose is the valet/manager of NAWC star Bloodstorm. It is unknown what their relationship is but they are always close to each other. Like Bloodstorm she is a vampire. Supposedly over 200 years old she has found a legal craft she is good at and has spent much time training to become the best women’s wrestler in the galaxy. Now with a women’s division in the NAWC she has a place to showcase her impressive skills. She won the inaugural NAWC Women’s Tournament beating Viper Vixson in the finals to be declared the first NAWC Women’s Champion. She has also started accompanying Tzimisce the newest member of the Vampire Nation to the ring. Blood Rose has also started feuding with newcomer and valet of Danny Sage, Pandora. There seems to be a deep seated hatred between the two but the two have kept quiet and have instead dealt with the hostility inside the ring. 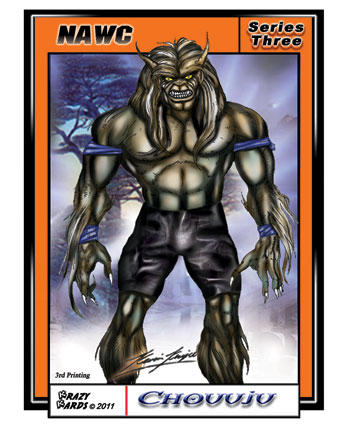 Chouuju and his people lived in the vast jungles of Alaara. It was there that Chouuju’s future was chosen for him as former GWF and current CPC wrestler Terak went searching for the elusive race that was long thought extinct. After months of scouring The Deep Lands, Terak finally captured his prey. Terak then brought the beast out of the jungles into civilized society and brought him to his temporary zoo on Planet Colby. Terak then named the beast Chouuju that means Super Beast and unveiled him to the galaxy at large as his greatest find.

When Chouuju finally recovered from his initial shock at being torn from his natural environment, Terak and everyone flocking to see his latest find found out that Chouuju was an evolved creature with an ancient language and civilization that has been around for eons hiding in secrecy for their fear of the outside world. Terak tried to calm Chouuju down but he would not be held in captivity any longer, as he broke free from the zoo and found a man willing to help him escape who went by the name of Orphen. Orphen turns out to be the miss-begotten son of Terak. On the space flight back to Alaara Orphen and Chouuju became friends and their hatred for Terak only grew. Orphen then told Chouuju he had the perfect way to get back at Terak, become a pro wrestler! Chouuju who was an experienced hunter was excited about actually getting his hands on Terak. Orphen then brought Chouuju to Adam Smasher and along with some other students were taught the finer points of wrestling as well as an even greater hatred for Terak and the Savage Kingdom team he leads. Now as training has finished Chouuju has entered the NAWC for some fine-tuning to his repertoire before he goes after Terak. Chouuju has also recently aligned himself with Viper Vixson, who he sees as a kindred soul. 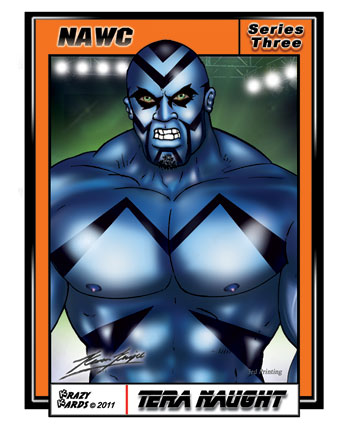 Tera Naught has been brought in to help Ciber Naught and Assassin X in their new war with Belroc, Sekada and the traitor Hangman. Tera comes from the same warrior class as Ciber Naught. Tera Naught is a loyal no no-sense type of soldier who was an elite member of the Kelins military that was once run by Ciber Naught.Tera Naught is totally loyal to Ciber Naught because of their long military careers together. After Alaara united under one government Tera Naught’s unit was disbanded and like Ciber Naught, Assassin X and the Hangman trained to become wrestlers.

Tera Naught is a power based wrestler that enjoys dishing out punishment to his foes. He has been known to lose control of his temper at times as well, so it is not wise to get on his bad side. He will not except failure or defeat. He won’t give up until he has won or beaten his opponent. He will do what ever is necessary to be victorious over his opponents and does not mind if it’s legal or not! A “Win is a Win” so he often says. Tera Naught also likes to team up with his other military brother Assassin X on occasion.

Blood Dragon — member of the (Council of Wyrms)
Card: 24 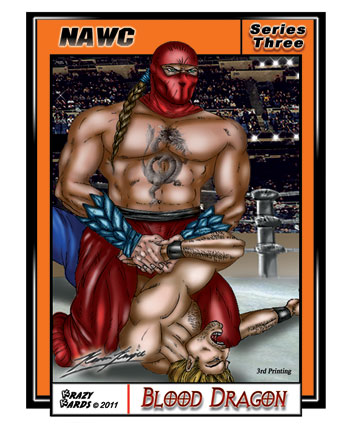 Blood Dragon is the man formally known as Raal who been reborn as Ketsueki Ryuuko the "Blood Dragon". Ryuujin took personal care in the transformation of Raal as he personally helped train Ketsueki into the fighter and man he has become. Ketsueki who at one time was a member of the Horsemen of the Apocalypse he had never lived up to expectations, and when the leader of the Horsemen failed to materialize Raal left Man-O-War and the other horsemen to go his own way. He drifted from fed to fed but finally returned to the NAWC and soon made an alliance with Ryuujin who saw in Raal an untapped potential that could help the Council of Wyrms gain the stature that was meant for gods.

First Ryuujin had Raal team with Dragonstar so as to give him the chance to team with an established star and to learn the ropes without having all the expectations heaped on him like what happens to singles competitors. Then when Dragonstar taught Raal all he could, Ryuujin took Raal and sent him to his private dojo to learn from Ryuujin’s masters who were supposedly descended from true dragon blood. Raal after his training was then put through a special ceremony that infuses dragons blood into the participant. When Raal returned he was a new man, infused with the blood of dragons and taught by masters of unarmed combat Raal took his place as the right hand man of Ryuujin. Ketsueki is now primed to be the main attack man for the Council of Wyrms and he will do anything to make sure the prophecy of the dragon comes true. 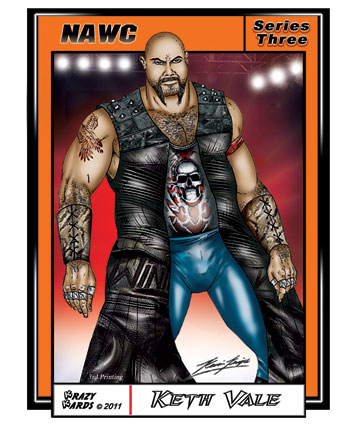 Keth Vale has been driven to the point of insanity and he has walked the line between saint and sinner and the sinner has won out. The man once known as "Gravedigger", the destroyer of many an aspiring wrestlers career has been revealed as Keth Vale by his former best friend and his worst enemy Johnny B. Johnny and the Stargazers spent months torturing Keth making him hear things when no one was around, making him see things when nothing was there and telling him his past would be revealed to his brethren in The Inquisition.

Keth who after all this time still could not forgive himself for his past deeds and he feared he would be expelled from his new home in The Inquisition. So he tried to find the people responsible for his dilemma but all he found was dead ends. Then the signs started pointing to his fellow Inquisition members, could they be testing him, seeing if he had truly given up his past life and repent? But times were tough, Azrael the man that had saved Keth from ruination after everything and everyone had given up on Keth all those years ago, had been expelled from the NAWC by his blood enemy Xaphan of The Unholy.

Keth and Kenmore were also on the losing end of their war with Primal Fear and Keth seemed to be losing everything once more. Unable to cope Keth lashed out at anything including ringside fans holding up signs he didn’t like as well as turning on his teammate Jason Kenmore who he thought had planted dozens of his old Gravedigger masks from the ceiling in his dressing room. Then Johnny B and the Stargazers came out and told the galaxy that they were responsible for Keth’s breaking and they were here to finish the job they started 5 years ago. Keth at this news went into solitude trying to figure out what to do next. First he went back to The Inquisition trying regaining their trust but because he could not forgive himself for his past and present misdeeds he was told he would not be allowed back until such time as he could prove himself worthy. Keth then went after the Stargazers but he was outnumbered 4-1 and was beat down badly. He then went out and found 3 men to join him in his battles, 2 of which grew up with Keth when they were kids. He has also been seen talking to 2 VKW wrestlers, what this means is unknown. For now Keth The Mook, Dillon and Brock Mason look to shake things up. 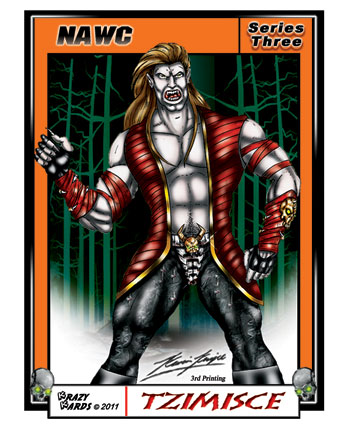 Tzimisce joins Bloodstorm and Blood Rose as a member of their Vampire Nation. He at times seems to run the group but Bloodstorm remains the focal point for the groups actions. He is very cruel inside and outside the ring and loves making his opponents bleed so he can taste their blood without actually feeding on them. He comes from Eastern Europe and has a haven somewhere in the Carpathian Mountains where he grew up in isolation. It is believed he is the incarnation of many vampire tales in the region but nothing has been proven and no one that has ever investigated has ever come back to report their findings. He does nothing to recant the claims and even plays up on others fears but he always says this is just an act…..or is it!