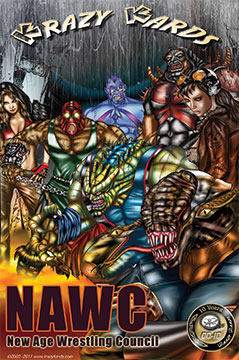 Krazy Kards are still independently made fantasy wrestling cards based on the Champions of the Galaxy wrestling game system which was put out by Filsinger Games since 1986. In the summer of 1999 my close friend Keith had introduced me to the world of Champions of the Galaxy game which he had played for some time. I was immediately interested not so much for the game play itself but more for the creativity outlet part of the game which is rare to find. Before we started producing cards for a copyrighted game system we set out to get approval to do so. Once I got Tom Filsinger’s stamp of approval we started to produce new materials.

We immediately wanted to somehow improve on this great game and thought we could improve the way the cards looked, maybe produce them in full color, somehow improve the game play experience, without trying to copy what others had put out in the past. We both set out to produce a better improved quality card set which we started to put together in September 1999 and finally finished and released our very first set by late Dec 1999. The first orders came in Dec and shipped out by January 2000 even with Y2K we got the sets out. The first feedback was very good and we started to become a hit at the time. We even managed to create a loyal following of game players of our own which was unexpected but very rewarding.

The positive feedback only inspired us to produce better cards, characters and new storylines for many years after. Over the past 14 years we have produced various types of sets, special edition cards and other promotional materials. I actually even got to produce a few cards for the official game which was really a nice personal goal.

Krazy Kards have been going strong for fourteen years now and don't intend on stopping now. We are a typical bootlegger, we have simply expanded on a great idea and have only made the game playing experience even more enjoyable to play. If you want to contact either of us you can by email we usually get back to you in a timely manner. We are always interesting in hearing what you have to say good or bad and are always looking to improve and make new fun material for all to enjoy.

Customer feedback: Kudo's to Kevin at Krazy Kards, I bought all seven sets and there are AWESOME!!!! You will not be disappointed, go for them if you can there worth it! — Ray

Like to Promote Krazy Kards Copy and Paste this banner onto your webpage, email or Facebook page and link it to www.krazykards.com

You can email all Kevin or Keith:

About - Tom Filsinger, a game entrepreneur and psychology professor, has published a memoir on creativity called The Dark Menace of the Universe. The book is an analysis of creativity as it relates to rebellion and culture. The book also describes how Filsinger Games carved out a successful niche in the independent game industry.

In The Dark Menace of the Universe, Filsinger tells the inside story of how he created card games like Champions of the Galaxy and Legends of Wrestling.He discusses how he proposed a wrestling game to the WWF in 1984 only to be rejected in favor of a Milton Bradley game, and how this rejection inadvertently led to the creation and success of Champions of the Galaxy. He also discusses the pros and cons of owning and operating an independent game company. Read More ...

About our connection with Tom Filsinger of Filsinger Games . Kevin Knipe got to met Mr. Filsinger at a Galacticon convention back in 2001. After meeting with Tom we discussed opportunities to work on future projects for Filsinger Games which led to creating their very first color cards, brochures and even on the COTG online user interface. We got a special privilege to produce a few limited edition champions of the galaxy wrestling cards each year before they went main stream with full color production.

In order to use Krazy Kards you will need to purchase the Champions of the Galaxy (COTG) game system.
You can visit Filisinger Games for a variety of different wrestling online and offline game systems.

For ordering and other general questions contact Tom at: 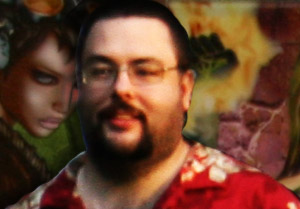 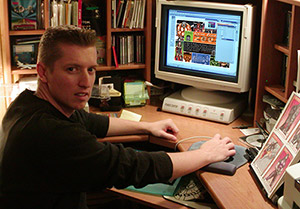 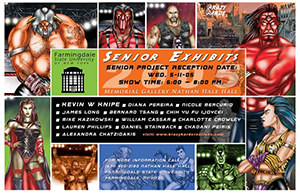 Tom Filsinger auctions off the first Color LOW Road Warrior card Hawk at the Galacticon Convention back in 2003. 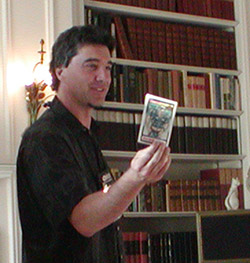 Tom Filsinger promotes Krazy Kards in Jamestown New York at the Galacticon Convention back in 2006. 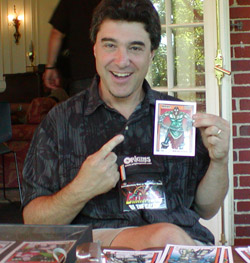